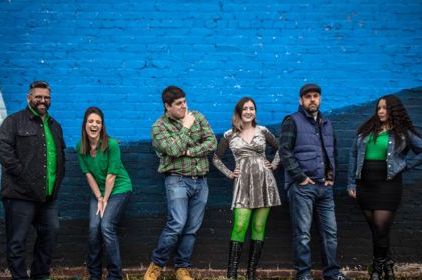 As the name suggests, Uncommon isn’t just another contemporary a cappella group. Founded in 2013, this eclectic semi-professional septet draws inspiration from RVA’s legendary indie music scene to create a vocal sound all its own. With a unique arranging approach that fuses indie and alternative rock with jazz, barbershop, and anything else that sounds cool, this award winning vocal band aims to show the audiences exactly what it means to #SingDifferent!

Uncommon will be joined by Dragon Scales, the coed a cappella group from the Appomattox Regional Governor’s School (ARGS), founded in 2013. Dragon Scales spends their time performing for the local area and competing up and down the east coast in the International Championship for High School A cappella (ICHSA). Most recently, they won the Mid-Atlantic championship in spring of 2018 at the Lincoln Center in New York City. This put them among the top 9 high school groups in the nation that performed during the finals of the competition. They went on to record their first 4-song EP, Burn, that can be found on iTunes, Spotify, and Google Play stores. Be sure check them out on social media to keep up with their latest performances and accomplishments!

Part of Henrico Live’s 5th Season. With our season ticket deals, YOU pick the performances your ticket purchases, and you save up to 50%! Learn more.