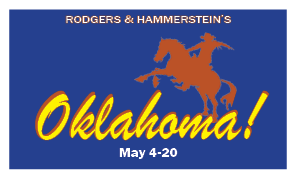 Rodgers and Hammerstein’s first collaboration is set in a Western Native American territory just after the turn of the century. The high-spirited rivalry between the local farmers and cowboys provides the colorful background against which Curly, a handsome cowboy, and Laurey, a winsome farm girl, play out their love story. Featuring such well-known songs as Oh, What a Beautiful Mornin’, People Will Say We’re In Love, The Surrey with the Fringe on Top, and I Cain’t Say No. “A masterpiece of musical theatre.” – London Daily Telegraph.

Showtimes are at 8pm except for Sunday matinees which are at 2:30pm.

Tickets are $10 for adults and $8 for 55+ and students per show. Purchase tickets.